Who You Meet Along The Way … An Extraordinary Adventurer

The author of three books and the swimmer of many cold water swims, Lynne Cox is someone that Doug not only admires but follows like he’s crushing on her. So when she rolled into our neck of the woods to do a book signing of her latest book “South With The Sun,” I tagged along mostly out of homage to this woman’s amazing accomplishments as well as curiosity over my husband’s seemingly smitten stalking of her.

In the car on the way to the event I held her book in my lap and read one chapter. It was the one entitled “Coolest Crossing,” chosen because of the title and because it had interesting pictures. I’m not a swimmer, not even close, and my interest doesn’t extend beyond Doug’s involvement in most cases. But I was about to become enlightened.

I read the whole chapter and wished I had been more open minded and allowed myself to read this chapter much earlier so that I could have read the whole book. I was enthralled with what I read. With her. With her team. Her team was, a little, like me. She was, a lot, like Doug. And not only was I about to hear her speak, I was also about to be part of a small group sharing dinner with her at an intimate restaurant. I was nervous.

Sitting in the back of this little, independent bookstore, Lynne began her speech with lessons from what she has learned and seen. She told us that greatness begets greatness, meaning that when you start out to accomplish an amazing task, you look to those who have achieved those tasks. They, on the other hand, will almost instinctively bestow you with their greatness when they recognize the possibilities that you possess, and will give you information and strength to move toward your goal. She further said that those who have achieved greatness feel it is their responsibility to recognize those with possibility, those who are full of potential, and they feel it is their responsibility to pass on their ability.

Doug has seen this firsthand in his quest to conquer his open water swims. There are a handful of individuals who have achieved greatness who have bathed him in their light and empowered him. Sounds a little Star Warsish, but I’ve seen it.

Lynne then went on to recap the same chapter, Coolest Crossing, I had belligerently read on my way there. Magic was happening all around me.

Our dinner was held at a small, Italian restaurant that was quiet and calm and the talk at the table was plentiful. Lynne answered all of our questions with grace and poise and good humor and seemed totally, completely normal. Despite the fact that I can’t swim (so she probably wouldn’t want to be friends with me) I thought that if she lived by me I’d like to be friends with her.

I asked her how old she was when she swam the English Channel for the first time. (She crossed a total of three times.) She told us that she was 17, the year was 1974, and she set the record for women as well as men.

Doug asked her if she had ever swum the Straits of Gibraltar. She told us that she was the first one.

This normal yet extraordinary woman has set records for open water swimming all over the world. She ate and laughed and answered our questions all night. I knew exactly why my husband was seeming smitten and why he stalked her.

The books written by Lynne Cox are:

Swimming to Antarctica
Grayson
South With The Sun

They are all available on CD.

This is a picture of Lynne Cox at her book signing … 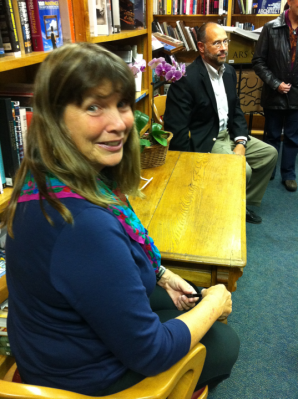