Dover Sole. Had to.

Spring break arrived and we left for San Diego to visit family and watch Doug get in some open water ocean swimming. Billy celebrated his 19th birthday at the same time. We rented a little beach cottage and Mack, the oldest of the kids, came down from San Francisco for the week. We were all together, which doesn’t happen all that much any more.

One night after Doug and I went to bed all four kids hung out on the christmas light surrounded back patio and smoked cigars, including Ashley. Wish I had a picture of that.

The whole trip we were on the lookout for a woman named Anne Cleveland. Anne is the woman who has done a “two-way” and that just doesn’t sound good. It’s English Channel slang for swimming both ways. That’s right, when she arrived on the shores of France she turned right around and swam back to England.

We never found Anne, she must have gone to Chicago for spring break, but we met some other swimmers who belong to the LaJolla Cove Swim Club, just like her. They meet every afternoon in their beautiful cove that is surrounded by seals, sea lions and cormorants and swim a circuit that includes some pretty intense open water. Alot of these people have either swum the English Channel or plan to. One woman we met, named Sabrina, whom you’ll see in this video, is going to swim in a relay of women who will each swim a one hour segment of the channel. I had no idea that you could swim the channel in a relay.

While I was taking photographs and video it was hard to focus on the swimmers and not on the seals and sea lions, some who had babies. There are a few shots of them in this video. Hope you like it.
//www.youtube.com/get_player

My Bionic Boyfriend’s English Channel Swim was announced at the Les Turner AlS Foundation’s annual gala ball as Chicago’s super moon rose above us. The photographer was inside entertaining everyone with her camera and missed the whole astronomical event.

Note … my bionic boyfriend looks better in a tux than a speedo. Or is it the other way around?

Ok, so it took place on Wool Street, not the White House, but it was a press conference. With our local New York Times … the Barrington Courier Review. Their local muscle is a strength to appreciate and, on top of it all, these people were really nice to hang out with for the morning. They like a good story, and this qualifies, but they feel equally strong about spreading the message about the cause for which this English Channel swim is dedicated … ALS.

Note … My bionic boyfriend talks with his hands. 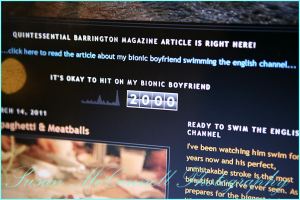 I’m hoping that one of those 2,000 hits came from Nora Ephron. Nora, call me.

Cooking for a family of six, including three boys, and having grown up in a big family in the midst of Upstate New York winters, what do you think I bring to the table? …pot roast … pork chops … spaghetti and meatballs… But, all good things must come to an end and it’s time to trim the menu. Endurance athletes need to get the majority of their protein from plant based sources. I wasn’t sure why I took this picture of our spaghetti and meatball dinner on this evening but it has come in handy now for this declaration. Goodbye red meat.

“Barrington’s Biggest Birthday Party” is the theme of this year’s Relay for Life to benefit the cause we all love to hate … cancer. Doug’s “A Long Swim Team” will be there and we’ll have a tent and the whole shebang. June 10th, 6:00, Barrington High School. I’ll be there with my camera … and my sleeping bag. We’re looking for team members so please join in. (“A Long Swim” is raising money for ALS but this is very local and this will get the word out. Just watch what we can all do together.) (PS … My kitchen is messy, but my bionic boyfriend is really the bomb…he’s lighting the candle for Gordy’s 17th birthday.) 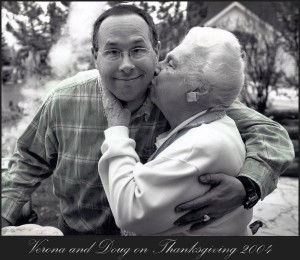 Every so often she’d say the same thing to me. “How the hell did you get him to marry you?” My mother, Verona, absolutely cherished him. I wasn’t allowed to make one complaint. She lived down the street from us for 13 years and she was just like a second mother to our kids. As she got older and sick we all took care of her. She passed away one November evening in a hospice bed with all of us around her in our family room. Complete with the Christmas tree that we put up way too early, so she’d get to see it one more time. It was Doug’s birthday.

Yesterday, March 3rd, was her birthday. She would have been 86. If she were here she’d be the oldest member of A Long Swim Team. And she’d insist on being on the guide boat that accompanies Doug across the English Channel. And probably more than once during the trip she’d lean over and whisper to me, for the millionth time, “How the hell did you …?”

Photography is telling stories with pictures. Love and a Camera is a hybrid blog, covering anything that comes in front of my camera that I happen to fall in love with.